Media publication on the ordinance process in buliisa

In the last two years AFRICE with support from Gaia Foundation has facilitated Buliisa district Local Government to develop an ordinance to recognize the customary laws and sacred natural sites and territories of the indigenous Bagungu people, living near Lake Albert. By making the customary laws to protect these SNT&T, AFRICE is implementing several resolutions made by global and regional bodies (UN, IUCN and African commission) to recognize the intrinsic values of sacred natural sites.

The international recognition and protection of networks of these potent sites imbanded in the ancestral lands, has been supported by a growing body of international instruments and initiatives, with broad acknowledgement of indigenous and traditional communities as custodians of these sites, with customary laws to regulate human activity especially on key biodiversity areas. It is from this background that a growing number of tangible cases of reviving and asserting legal recognition for SNS&T, have emerged on the region (Benin, Kenya, Ethiopia and now Uganda), all of which provide useful precedents for regional recognition. Thanks to Gaia Foundation and other partners for walking an almost successful journey with the indigenous communities around the world.

This project therefore, is aimed at securing a district-level ordinance to uphold the Bagungu customary laws and exemplify how the Rights of Nature clause of Uganda’s National Environment Act can be implemented. The project also envisions to Protect the traditional knowledge &sacred places of Bunyoro Kingdom, in the face of rising threats to local communities, Wetlands, Waterfalls and one of Africa’s Great Lakes.

Being the first of its kind in Uganda, this project is being co-implemented with ANERDE who together with Gaia Foundation have been leading the legal interpretation of the ordinance especially to the communities, custodians and Buliisa district leadership. AFRICE has been on ground to coordinate the Bagungu custodians and the Buliisa district leadership to revive their customary laws and governance systems for the recognition and protection of SNS and ancestral lands around Lake Albert. 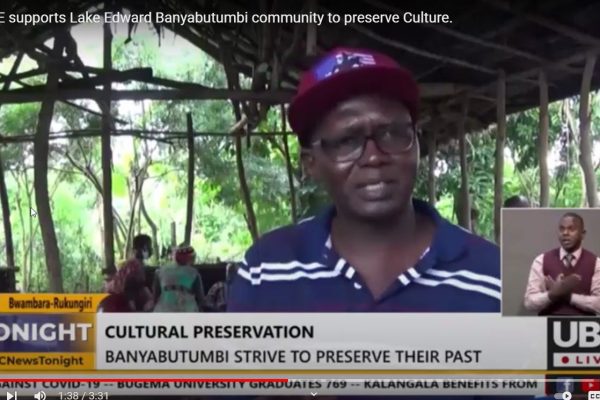